Temperature Check - Should Uniswap incentivize Liquidity on Optimism and Arbitrum? 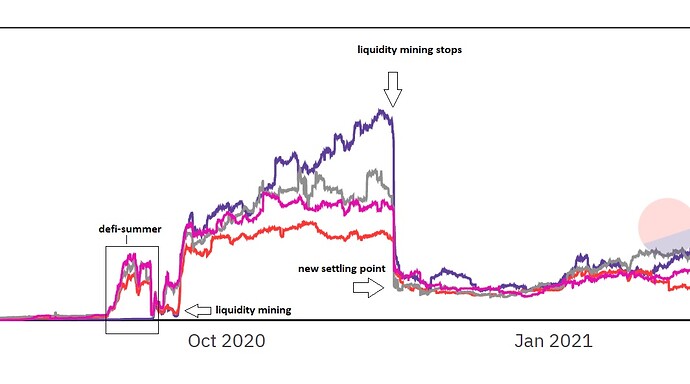 In the above chart, we can see that volume had tapered down after the large volumes of 2020 Defi Summer. 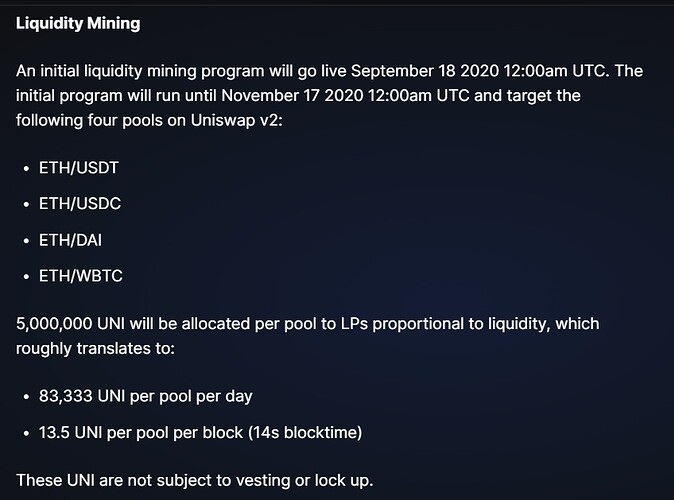 The key improvement lines are: 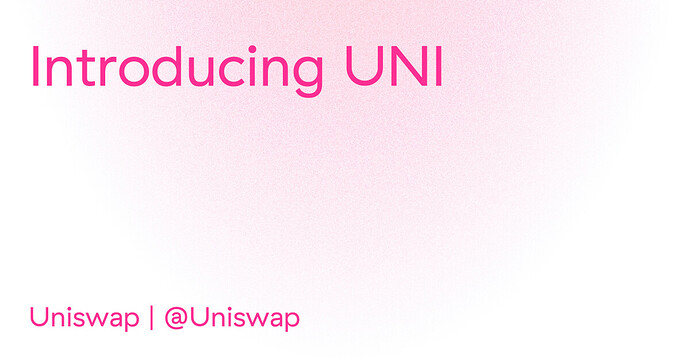 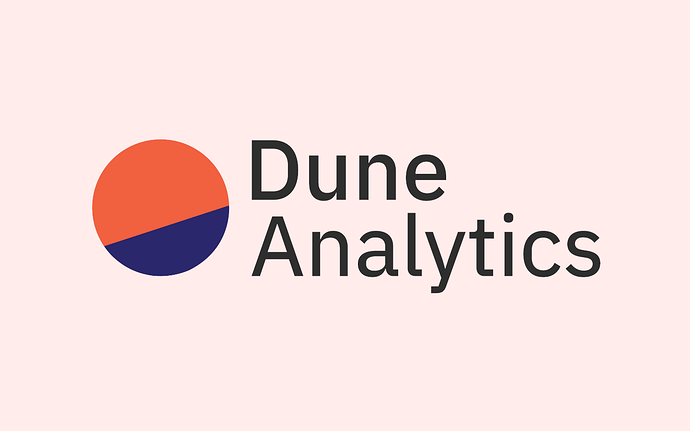 Ethereum Ecosystem analytics by and for the community. Explore and share data from Ethereum Mainnet, Matic, Optimism and xDai for free.

Well, you just proved my point - Liquidity mining is awesome until it lasts. When it ends, it is bye bye liquidity. Liquidity is not loyal. The origin of the “new liquidity” you indicated is questionable to say the least. There is simply no supporting argument saying that the cost of a liquidity mining campaign supports liquidity in the long run. The majority of liquidity goes away and the costs are huge. This liquidity blip you indicated was attained at the cost of having the mcap of the UNI token halve - 350M USD in marketcap lost + additional inflation of the coin which is never going to reverse. Is it worth it? In my eyes, absolutely not. If we were to do this same liquidity mining campaign today on the same scale, the token would lose vast majority (90 % btw) of its value. How is it fair to the token holders? Like I´ve said before, there is absolutely no reason to do it in this fashion instead of OlympusDAO model. At least there its proven the liquidity will stay so why are we even talking about it? Why would we pursue a less efficient model? Why would we want to make the token holders lose value when they dont have to? Is there some kind of a fetish that the token holders´ value must go down?

Also, I´d kindly ask you to refrain from saying that it is justified to go to consensus check. Unfortunately, this is the way the governance works and it does not matter how many smaller wallets voted for it. More votes = more influence on the vote.

Absolutely in favor of this! Agree!(1)

I will definitely re-submit this vote as it was literally ambushed by a single voter last minute.

There is overwhelming support for it both on social media and privately.

I will re-submit on Monday and accept the outcome of that vote no matter what.

Points to consider (from this forum thread) to be addressed in a new proposal temperature check:

We all support this proposal

We strongly support this proposal. At present, arbitrum and optimization have two problems to continue to solve:

It is precisely because liquidity mining has detonated the market. After mining is cancelled, the reduced stock capital is also far greater than that before liquidity mining. We need to quickly enter L2!

We will include this Temperature Check on our community call Wednesday November 17th 16:00 EST on the agenda. Come on join the discussion in the official Uniswap Discord!

This is midnight in my timezone and too short term for me unfortunately.

Would have loved to discuss this.

Just wanted to say, in principle I’m in favor of offering liquidity incentives on Arbitrum and Optimism. I think incentivizing top pools (maybe just stablecoin/ETH pools or a select few others) for a short period will help cement Uniswap v3 as the preeminent DEX and liquidity schelling point for L2. And if Uniswap can support better L2 liquidity and trading experience, this will help onboard more small size users who are currently forced to use alternative DEX platforms on sidechains.

Incentivizing liquidity on v3 pools is somewhat complicated - giving yield only to LPs that are within the active tick can have negative side effects (see Ribbon finance for example: https://twitter.com/freddycoen/status/1460919501428559879?s=20). So maybe it would be better to incentivize wider ranges or get creative on exactly how rewards are calculated. Also think it could be productive to work with automation services like Gelato to offer better LP UX on L2 before we offer incentives.

Glad to see you chime in Monet and I agree on all points!

Re: which pairs to incentivize, I was actually thinking of only including key stabecoin/ETH pairs similar to the first Uni liquidity mining propgram in my next proposal for the Consensus check, just for the sake of making it as uncontentious as possible. But there’s definitely an argument to be made to include tokens of 1-2 key projects on each L2 (e.g SNX on Optimism).

Regarding widening the range for LP’s I agree 100% as well. This should be an opportunity to introduce normal users to Uni V3 lp’ing - not just gift $UNI to whales and market makers. I think most V3 LP schemes work in a way that you get more rewards the closer your range is to the spot price. I will get in touch with the Gelato and Visr teams as well as other experts to see if this can be tweaked so that everyone get’s the same rewards as long as they are within a certain range (e.g ± 20%).

There arent many projects on UNI Arbitrum and Optimism. I think it would make sense to take a snapshot of the current pools and incentivize all of them to reward early users/project creators. I dont see how it makes sense to incentivize only the biggest pools/stablecoins.

At least those which have some TVL. The vast majority of projects that launched on Arbitrum went to Sushiswap so I think it would be appropriate we reward those who stuck with Uniswap. Its like 20-25 projects. Why stiff them?

Thanks for writing this temperature check Lito!

I agree 100% that the Uni v3 Staker contract is not a good idea as it does incentivize a lot of opportunistic single-tick farmers, who are the least aligned with the project and create downward pricing pressure.

At Visor, we can work together with the Uniswap team to determine the right range to provide liquidity at. Our main Hypervisor contract interacts directly with the Uni v3 core contracts and we can dynamically set +/- x% range around the current price tick and automate rebalances when the price moves +/- y% from the center of the range. Alternatively, we can apply our own Auto Regressive Strategy which is designed to mitigate IL by widening ranges during high volatility periods and narrowing them during lower volatility time periods.

Because all our LPs would be within the same range, it wouldn’t be possible to game the LM mechanics through providing large single-tick ranges.

Happy to answer more questions about our LM program and would love to be part of the solution.

TL;DR: UNI liquidity mining rewards should be based on the amount of time the price is within the LP token’s range.

We’ve had a rather large downward price move in recent days and the “liquidity peak” is away from the current price. However, there are still enough funds locked at the current tick (>2M USDC in active liquidity) to limit slippage and be resilient against large buys-sells.

There is only 1.87 ETH lock at the current tick, that’s only $7,500 out of the $355m in TVL (!!). As a result, a relatively small transaction can drastically shift the price of MKR. Clearly, most LPs do not care about rebalancing, or perhaps they’re OK holding MKR, but the amount of active liquidity is way too small compared to the TVL.

The problem with the current LP staking contract is that it rewards users according to the effective liquidity, which is basically proportional to the amount of fees collected. Whales and market makers can easily shift their LP position in response to large price moves because gas costs will not matter as much once you cross a certain level (>$10,000?).

Smaller players, on the other hand, will rapidly get wiped out because burn+rebalance+re-deploy may incur $100’s in gas fees.

How do we solve this? How can smaller players that do not have time to actively manage their LP position still be rewarded for contributing liquidity in a manner that is proportional to their actual stake?

I am proposing to reward all LPs who have any amount of liquidity at the current tick.

But clearly, making everyone deploying to the Full-Range (which is worse than Uniswap v2 in terms of capital efficiency) would not contribute sufficient liquidity to decrease slippage, etc.

What’s a good limit for the maximum range?

So a Full-range liquidity would receive zero rewards, and any liquidity whose range factor r = sqrt(upperTick/lowerTick) is smaller than r < 4 will receive liquidity mining rewards.

The r < 4 criteria could be changed (a 4x price move is indeed unlikely for most assets), but r=4 LPs would still be performing 2x better than Uniswap v2.

After discussing these ideas with Dan Robinson and a few other people, I now realize that implementing my earlier proposal may require too big of a change to the Staker contract.

Note sure what’s the status of that proposal is, but I agree that one way forward could be to mandate that liquidity is deployed to a minimum “floating” range – ie have the position’s (upperTick-lowerTick) be larger or equal than a fixed value be centered at any price.

Choosing that range could be tricky, but it could be based on the 1-std expected move. For instance, a 1-std expected move for a 100% annualize volatility after 21 days is ±24%. So limiting the LP range to ±24% would only require a rebalancing every 21 days, on average.

By comparison, a 1-tick position in the 0.3% pool would need to be rebalanced every 20 minutes (clearly impossible to do unless you run bots), but successfully running this strategy would results in 34x more rewards than ±24% LP positions.

BTW, I suggested 21 days, but the number of days could be changed to whatever according to

I think targeted LM programs on L2 for Uni in this sense is far more justified since the intent is not to create more stable liquidity for just the Uni token and align incentives with long-term holders etc but obviously rather to bootstrap liquidity for the whole ecosystem (or at least the pairs listed in the proposal) which will drive add’l utility for traders to make Uni on Opt and Arb more competitive and attract users. The concerns around Uni price pressure are valid but I would also question how much demand there would be for Uni bonds in return for the pairs listed in the proposal.

One easy amendment would be to take a page out of Curve/Astroport/Yearn’s book and weight higher rewards towards those that lock up their liquidity for longer periods. If there was a way to do this w/ Gelato or Visor even better but I understand the concerns around add’l dependency risk. Different topic but Uni should consider a DAO acquisition of Gelato…

I second that! L2’s definitely need that push to help scale up defi