In light of community feedback, we would like to propose minor revisions to the Community Governance Process that will make participation easier. These proposed revisions will remove unnecessary friction but also introduce additional checks and balances to ensure that Uniswap governance can be effective, engaging, and robust.

Adoption of these revisions is subject to approval from the Uniswap community. We welcome feedback and comments, which can then be incorporated into a final version. 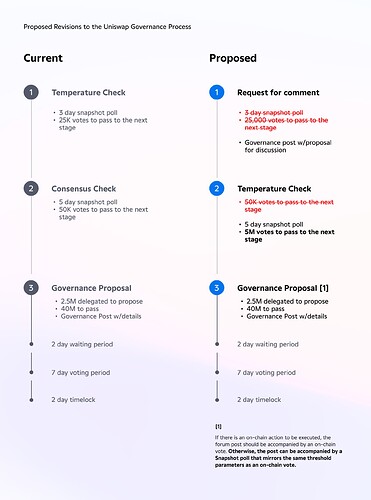 A three part process allows a governance proposal to evolve in public from the ideation stage to a formal on-chain action. We believe that some minor tweaks to the first two stages will produce higher signal value while reducing some of the existing operational overhead and complexity.

With a relatively low 25k UNI yes-vote threshold and historically minimal engagement, the Snapshot poll at this stage has not served as an effective signaling mechanism; several proposals have bypassed this step completely. Moving forward, it should be sufficient for the proposer to merely submit an idea and gather feedback during this process.

Additionally, we recommend removing the mandated 3 day period for this phase. Instead, the proposer should have as much or as little time as they think is necessary before moving to the second phase. Proposers should note that for potentially contentious or complex proposals, a longer Request for Comment period is more likely to result in useful feedback and an ultimately successful proposal.

In order to improve the value of this 2nd phase as a signaling tool, we suggest increasing the Snapshot poll yes-vote threshold from 50k UNI to 5 million. A 5 million threshold should be low enough for serious proposals to pass — recent on-chain votes have received upwards of 90m votes — yet high enough to stop lower quality governance proposals from making their way to the on-chain governance phase.

This new Temperature Check phase should be interpreted as a rehearsal referendum on a given proposal. If a Temperature Check does pass, the Uniswap community will have a clear sense that the proceeding on-chain vote has sizeable support and can mobilize turnout accordingly.

However, we suggest that any governance proposal that does not entail an on-chain action (e.g. a transfer of tokens, the introduction of a new fee tier etc.) should take place on Snapshot in order to avoid unnecessary gas cost overheads for voters. Off-chain proposals should continue to abide by the standard on-chain voting parameters — currently, this entails a 7 day vote period and a 40m yes-vote threshold.

To summarize, we suggest the new process function as follows:

We welcome feedback on this revised process and will attempt to synthesize feedback into a second document before formally adopting it.

Looks great, are you planning to do a temperature check to adopt the changes

Thanks for posting, Teo and Uniswap team!

Other Internet has reviewed and we believe this is a good simplification. Interviews with various proposal creators and governance participants in the Uniswap ecosystem have yielded some evidence that the current intensiveness of the governance process is a barrier to proposal creation. We think that the elimination of one Snapshot poll is a good first step.

While we’re visiting this, one thing to note is that more standardization around how to set up Snapshot polls would be helpful. Framing of “yes” and “no” votes could use particular attention (here are three different polls which each have different phrasings for yes and no votes — some do not show up in the UI properly). Using “no change” as a standard for no votes, at the very least, would be a reasonable starting place.

Beyond this, a visual guide to creating a Snapshot poll and clarification for how much content from an original forum post should be included would be helpful to have.