As a UNI token holder I didn’t have enough time to signal my full support to previous thought leadership proposal, so I would hereby like to voice my unconditional 100% support to this one. I believe that shaving ones head is the strongest form of thought leadership at least since Britney Spears famously shaved her head following her ascend to fame after releasing the hit “Baby One More Time” in 2007. She thought lead the whole generation of thought leaders. I believe it is time for DeFi to enter mainstream thought leadership movement and I dont see anyone better equipped to follow Britney down this path than another blonde pop music icon - Crypto Cobain.

I support this proposal.

Can we commission “Jim will paint it” @Jimllpaintit (twitter) to capture the moment as an NFT?

Love to see it! Plus this post alone might draw more ppl like me who have never used the governance forums before. This is triple win! This unironically deserves grant moneys

You have my full support. [insert legal jargon here]

Can’t image anyone not support this!

A request - If Uniswap Devs have blocked someone on twitter, can the Cobie Fund be used to pay the devs so that they can unblock them? Asking for a fren

I support the proposal, but I’m not gonna buy that shitcoin UNI just to vote. Hope the handful of UNI whales can do the right thing!

I will support if all those who shave their head as yours, with proof ofc, can get 20 UNI from the fund. For a CHF education and awarness around the globe, to show that not only you, but others can have the same bald style.

Obviously this proposal is satirical (and heartfelt apologies to those paid well enough to not be able to laugh), but in the wise words of popular philosopher J Cole “all good jokes contain true shit”. It is probably worth reviewing why a joke became one of the top 5 most viewed Uniswap proposals ever. By the way, can anyone tell me how I progress this important proposal to on-chain voting so I can get my fucking money?

Personally, I am relatively supportive of a lobbying group that is pro-defi. It is clear to me that often politicians are particularly poorly informed and it makes sense to me that an open industry should use any tools available to progress forwards. Whilst I think lobbying itself is anti-democratic, I believe “hating the player instead of the game” is a misdirection of energy. I think $20m sending good actors that understand the realities of crypto to lobby directly is probably a pretty good use of money.

I also think that the way the vote passed, the transparency around the proceedings and the level of rigour required to acquire $20,000,000 from a forum post were all significantly lacking what you would expect for a topic as controversial as this.

It is clear this topic will remain controversial and there are a lot of extremely nuanced opposing views, but it is also important to highlight that it is a controversial topic that can impact DeFi industry-wide, and not just UNI token holders.

Anyway, why is there a backlash? I think there’s a series of factors that are prompting the joke to resonate.

It is difficult to avoid the prevalent feeling that there some “governance theatre” occurring, with DAO-shaped hoops simply jumped through to issue the wishes of large holders after discussions in closed-door environments.

A range of factors contribute to this: 1) large delegates and ecosystem participants feel their feedback was not addressed or was outright ignored; 2) significant amount of voting share from the proposal proposer and related parties (something like 7 addresses responsible for huge amounts of pro-vote firepower) ; 3) lack of clarity around who the founders of this effort are creating a “vote to give ourselves money” narrative; 4) centralisation of supply making governance participation futile for many who feel their interests are being voted on without way to make their voice heard – snapshot vote would’ve failed 4:1 without the 3 student groups voting; 5) significant lack of thoroughness or rigour in the proposal making $20m grant surprising, pushing people to believe in foul play and cronyism rather than irresponsibility with treasury. 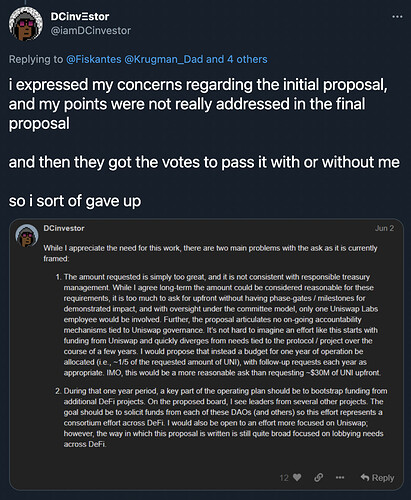 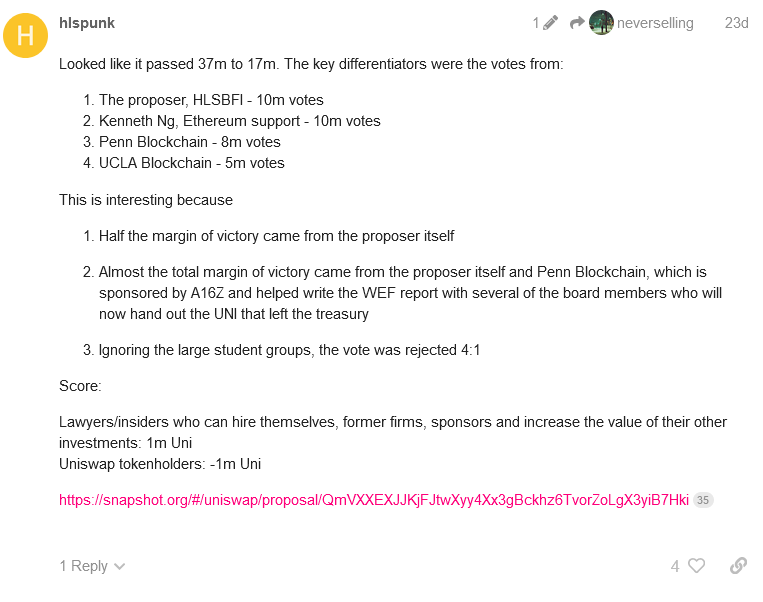 It is not unreasonable to suggest that decisions are not made by the community but instead by a handful of power brokers. Centralization often results in nepotism and a series of these factors offer the question: is this governance theatre to extract liquidity from the treasury?

2. Purpose of the Uniswap treasury

There are a lot of questions around the purpose of the Uni treasury that have arisen from this grant. It is unsurprising that there are a lot of different views between UNI holders and it is difficult to ignore that the view being most well represented is the view from large centralised supply holders, mostly VCs, who will take cross-portfolio benefits from spending the Uniswap treasury’s money on industry-wide lobbying.

But do smaller UNI holders feel they were “dumped on” for something that perhaps doesn’t directly benefit the UNI ecosystem?

Do non-US based UNI holders have to do another proposal for reg lobbying in their own country?

Would there be less backlash if such an effort was co-funded by a consortium of DAOs or crypto projects?

Perhaps some structure and opinion to how the Uni treasury should be used would be useful to set expectations around what should and should not be funded. Is the Uni treasury for investing in the Uni ecosystem directly only, or is okay to generally fund vague proposals that you believe are probably well intentioned but require effectively dumping on the ecosystem for (fingers crossed) long term cross-industry benefits.

I believe there is an expectation that, in order to acquire twenty million dollars by posting on a forum, there should be a “no stone left unturned” approach and a general lack of vagueness. I guess in crypto many ecosystem participants harbour significant cynicism towards traditional finance and traditional government, and therefore (maybe unrealistically) expect a higher standard.

Should it be possible that things like “when will you sell the Uni we grant you?” should be left to vague interpretations, or is it something that should be required info before you vote on the proposal?

Is how you sell important? Should that be specified in a proposal that requests $20m? Do you get to choose which OTC service you go with, can you go with your friend’s OTC and earn him a commission?

Should there be more information before a snapshot vote on who will be involved in this effort, who is securing the $20m grant?

Should there be transparency regarding who is backing the proposer, or top voters? Should the proposer even be allowed to vote on their own proposal?

Should voters have an accurate overview on intended usage of the funds? Should there be any accountability back to UNI holders after the grant is issued? What mechanisms should be in place to ensure the entity acquiring the grant behave in ways that are aligned with the interests of UNI holders, or the Uniswap company? Maybe none?

God forbid if I link to anything Chris Blec has ever written, but he did have (maybe for the first time ever) some actual good points that went without response or reply. Should there be responses to dissenters, as long as they are acting mostly in good faith? Or does it not matter as long as you get the votes you need to pass?

What is the right level of analytical rigour required of a proposal to issue $20m from the treasury? It’s obviously extremely difficult to answer, but I imagine the recent proceedings that left many with questions is not an example of what “good” looks like. Which is a shame, because it was a decent opportunity to do things in a way that left everyone feeling aligned and informed. Nevermind.

I would like to note that any additional vagueness makes proposals passing less believable in a world where you believe in responsible treasury management and therefore reinforces anyone believing in VC-backed cronyism.

Honestly, if the Twitter account hadn’t posted anything, I don’t think anyone would really be talking about this much.

But an incomplete profile with default profile picture posting it’s second ever tweet to say “we dumped $10m of UNI, thanks” is objectively quite a hilarious way for those that don’t follow Uni governance to find out about this initiative for the first time.

Additional unintentional comedy from the feedback-directed name change to Defi Education Fund, which I think is the correct decision, but looks like intentional doublespeak to people hearing about it for the first time when they find out it’s a lobbying fund.

I understand that the majority of crypto projects are terrible at comms so hard to be surprised.

Anyway, I’ve spent way too long writing about this now, but thought it was important to restore my reputation as a credible and important critical thinker and not just a lowest-common denominator comedian.

It’s a complex topic, one that will maybe lead to some better outcomes for our industry (and maybe not).

It’s hard not to imagine how much more well received a consortium-funded “Defense Fund” with superior transparency and cross-ecosystem buy-in may have been. But maybe how some idiots on Crypto Twitter feel about this thing is not important at all in the long run. Everyone has their own vested interests anyway. Decentralisation is perpetual war, after all.

lmao get this man his money!!!

But in all-serious-ness, cobie is right, surely more checks should be in place before people can vote on whether they can recieve 20 million usd…

Hopefully this is a lesson for all DAO’s to take on-board and learn from!

Good post. A number of these concerns were also brought up in the original Temperature / Consensus checks and more or less ignored as the proposal moved to voting.

The whole process is being made a mockery by @HarvardLawBFI and their enterprise for “DEFI Awareness”.

Personally I think we should give you 20 Million, take the leftover money and get the hair laser removed.

I already did the VOTING POLL for you, just copy this link ( Snapshot ) and go edit this proposal and paste it there! YW

I’d like to fork this proposal to purchase “NADS” wax rather than a shave.

I fully agree with all of your points. The simple matter of the fact is the investors of Uniswap hold tight grip over what gets through and what does not. I do not know the true intent behind the governance thesis of the token, but that part is pretty much dead right? Unless you get the big boys to vote on your proposal, the chance it passes is pretty much slim to none.

Voices get regularly ignored, the forums are solely used to “announce” intent and act like people care when in reality…nobody cares. To a UNI token holder, it feels like we are a piggy bank which pumps up the price of their heavy bags so they could say, “Thank you very much.” afterwards and spend it on whoever, whenever, and with almost no accountability at all.

What can the average UNI token holder do to stop it? Pretty much nothing. Organized minority beats the overall majority in this model. Right now, Im trying to get the proposal to enable the fee switch on V2 online so the migration to V3 accelarates & holders could at least get some value in return for subsidizing the treasury. We will see how it goes.

I’m new here, I would Sha e your head for free! Instead of a celebrity, you could send food to the hatian people. They truly need it and would be forever grateful.