Thank you Monet!
I wanted to echo what I previously brought up on the community call; I think deep bitcoin liquidity is very important for Uniswap’s growth.

I believe that the DeFi summer, including Uniswap’s own liquidity incentive program combined with the current market conditions has created a very unique and valuable growth opportunity for Uniswap. This is an opportunity to attract new types of users in large numbers to the protocol and the greater DeFi ecosystem.

The goal of most liquidity incentive programs is to attract new users by making the app more useful (or useful to more people). So far, the UNI program has been very successful at achieving this goal, evident by the amount of new capital that has flown into the space in the past two months.

My argument is that this window of opportunity to attract new users to Uniswap has only just opened and we’ve yet to see the delayed user acquisition response to the liquidity program. I sense a growing interest in Uniswap as a trading venue outside of the traditional DeFi demographic and this interest hasn’t yet fully translated to active users; infrastructural delay being only one reason.

Creating liquidity depth has an inherent causality dilemma that is most conveniently resolved by liquidity injection via incentives but, due to the tech barrier between Web 3.0 and the rest of the market, the effects won’t always immediately translate. It’s important to note that significant reduction in liquidity will certainly erode this momentum, thus governance should take action. It’s fallacious to assume that the current state will remain as status quo if no further action is taken.

If there were to be a sense of urgency in returning the incentive program then, the importance of not losing this growth momentum should certainly be a major consideration.

Our goal should be to grow Uniswap and we should be cognizant that growing outside the current DeFi user demographic will have an increasing reliance on bitcoin liquidity.

Thanks for the comments @mosayeri. Listening to the community call, and reading the threads, it appears that the rough consensus is that the first “Success Criteria” that is most important at this time is reducing slippage on the top trading pairs. Based on @Mr_Po’s post above, 28% of WBTC trading have greater than 0.01% slippage which is far worse than USDT(7.5%), Dai(14%), and USDC(14%). Looking at the current slippage curve for each pair, it appears that bringing the slippage down for WBTC, Dai, and USDC pairs to parity with USDT might be a good first milestone to improve Uniswap’s product for whale traders. However, I don’t think we should be in a rush and recommend waiting a month or two to analyze the market and make sure we are making a well informed data driven decision on the size of the next liquidity mining program. 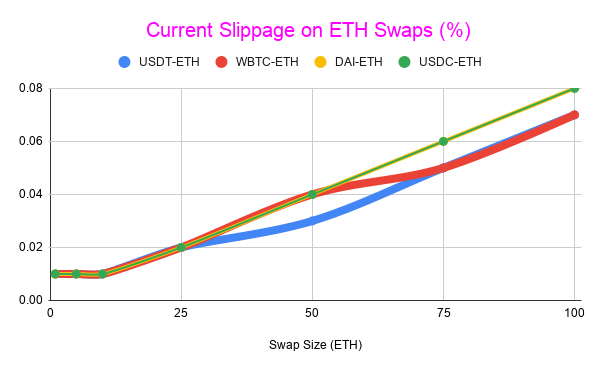 Also, here is a zoom out including swaps up to 500 ETH. 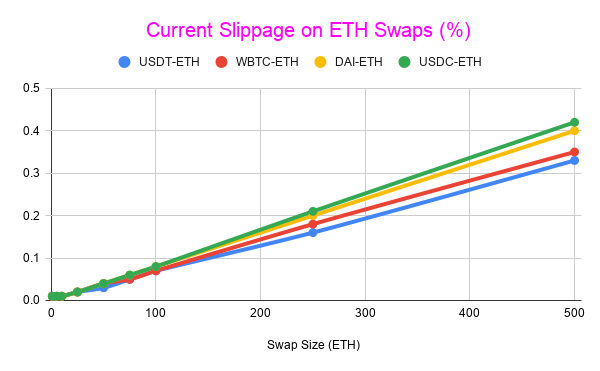 Something else that gives me pause on immediately restarting the liquidity mining program is the new user growth rate was already on an exponential growth trajectory prior to the September 18th launch of the LMP which calls into question how much of the user/volume growth is attributed to the LMP.

In contrast, here is the user growth trends for Compound, and it is very clear when Compound partnered with Coinbase in mid October on the rewards program providing educational lessons and COMP as a reward, new users skyrocketed. I wonder if Coinbase would partner with Uniswap on a similar program?

Final point here, this proposal is probably too far gone anyway(?) as most users will not vote against free money. But want to put a small thought experiment out there.

#1 this seems like an obvious homerun, think @mikedemarais floated this as well in the gov call. if we want to burn money, let’s do it in a way that supports developers and the ecosystem (which obviously returns value as well)

#2 not suggesting that this is brilliant, but it does prove a point. We 1) provide liquidity, 2) the capital remains in the “treasury,” and 3) shareholder dilution is basically the same as it would be under the current proposal (we should assume all the 10m UNI will be sold). It’s not hundreds of millions, yes, but that liquidity would actually stay there until governance decides otherwise. Unlike under a liquidity incentives program.

This idea could work. I could see us delegating someone from the dev team the task to swap UNI to wBTC and ETH at random times during a time span, and then LPing. (Please just don’t do it at once at a planned date, because LPs will all pull their liquidity).

This idea becomes even more appealing when you think about the APY it can provide for the treasury.

The disadvantage here is that you are competing with your very own LPs. But seeing as liquidity mining brings down everyone’s APY (when LPs suddenly flock en masse), I don’t think this is a real disadvantage over LM

Another novel way of incentivizing use would be Swapmining, which I discuss here.

Sorry for multi-posting.
I snapshotted today’s volume and liquidity for Uni and Sushi (at 1pm EST).
I want to remind voters that Sushi is essentially waging some kind of guerilla war right now against Uniswap. It’s targeting populaire DeFi pairs on a weekly basis and trying to make Sushi the default place to trade them. Sometimes it fails, sometimes it doesn’t. The thing is, they might end up retaining LPs even after the subsidies stop !

The data shows that COMP and UMA (both low volume pairs) at least today have better liq and better volume at Sushi.
For AAVE and SNX (higher volume than COMP and UMA), Sushi has better liquidity but it doesn’t have (yet ?) better volume. For AAVE and SNX we can say network effects are working in Uniswap’s favor. (It could also have to do with Uniswap stables liquidity as a lot of people swap from token to stables)

I hate to be the alarmist guy, so please draw your own conclusions here. I don’t know if Sushi can afford to print tokens at the same pace, but keep in mind Sushi friends could be artificially supporting Sushi token price right now (and thus Sushi LP APY) by market buying regularly.

See the data
Disclaimer : I’m not a data scientist

To me it makes a lot of sense for Uniswap to compete for liquidity and governance integration with all the blue chip DeFi protocols. These have huge growth potential, and also second order effects like bringing in active governance participants and encouraging those token holders to integrate more deeply with Uniswap at the technical/protocol layers.

I don’t fully agree with that:
It’s certainly the leader’s role to improve performances, by making things faster and more efficient.
But it’s often the challengers’ role to try different approaches, and to take the risk of failing with those in an attempt at becoming leader.

And for a leader, this second category of innovation can be used as free R&D, it’s only a matter of being reactive enough.

Over the last couple of days we have seen liquidity increase on pairs so it is a good sign that liquidity is stabilizing and increasing again. For example, the WBTC-ETH liquidity has increased from 145 million (11/26) to 199 million (11/28) flattening the slippage curve. You can now swap up to $15,000 of WBTC-ETH with only 0.01% slippage. 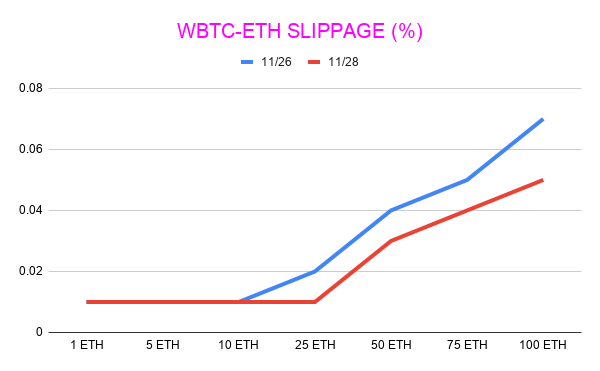 This is a good flag. Perhaps if we are going to incentivize any pairs, if should be the pairs that we are not currently the DEX market leader. If this is the strategy we would want to target the following pairs with liquidity mining incentives: CRV-ETH, AAVE-ETH, UMA-ETH, COMP-ETH, SNX-ETH, BAND-ETH, YFI-ETH. 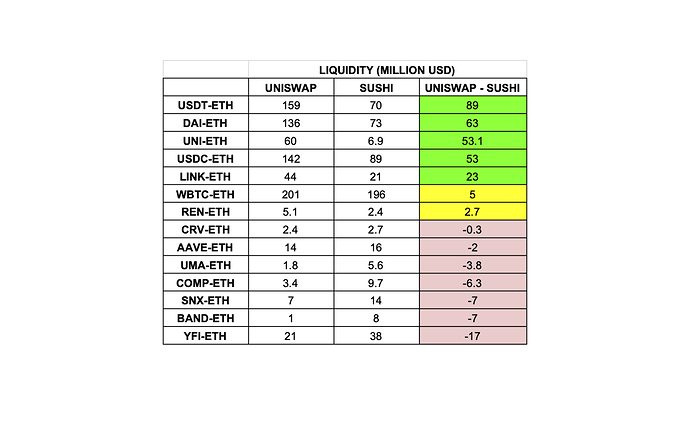 There is a combined $650M in liquidity for the 4 pairs we are signaling to incentivize. The original liquidity incentives created liquidity far beyond what was needed. Those pairs have sufficient liquidity without incentives. Why create significant inflation, devaluing UNI, to achieve a goal that we are already achieving?

I understand we would be cutting those rewards in half, but it still seems unnecessary.

Regarding the argument that we need to distribute more UNI to reach quorum in governance, https://explore.duneanalytics.com/public/dashboards/vYaXFE9DynDqNNE0WE3k5iFQJ5mgTVq5aD1OF9Ji shows that there are almost 90M UNI delegated. I don’t think the problem is circulating supply. I think the problem is finding a proposal the majority agrees on. So in this sense governance is functioning exactly as it should, rejecting proposals that a lot of people don’t like.

Totally agree with what you mentioned.

Hey everyone, quick update on the next steps - we’re still working on the distributor implementation so the proposal will not be submitted tomorrow. I’ll share an update in this thread once everything is ready for the proposal to move ahead.

The main myths have already been debunked here. The proposal will NOT benefit Uniswap unless there is a UNI-ETH pool.

You’re stating your opinions as fact.

The consensus check was a farce to begin with where a couple of people holding large sums of UNI voted FOR it and the majority against it.

This is how token based governance works; those who own more tokens get more voting power. Not a perfect system by any means, but there aren’t any great alternatives that are sybil resistant.

You are actively trying to steal value from people´s hard-earned money invested into Uniswap. Shame on you.

I think you should take a walk before hitting send next time.

Hey, when will the proposal be submitted since we already passed the temperature check.

So you didnt disprove any of the statements I made. Its not my opinion, its a FACT what I stated because we have just finished doing it. You are trying to manipulate the governance through this gibberish.

I will vote NO so should any holder of UNI as this is pure betrayal. You want to distribute more UNI to the already rich beyond their wildest dreams at the expense of the small UNI holder. Once again - Shame on you for promoting such a blatant cash grab.

There is a testament on the voting page of the cash grabs attempts of Dharma and co. and I sincerely hope the Uniswap community will rally once more and do the same again.